Gujarat along the western coastline of the country is a bustling tourist destination with a plethora of exciting visit-able places. The state enjoys the metaphor of being the ‘jewel of the West’ and is often compared to a luminous trident standing pompously along the turquoise Arabian Sea. There are many tourist hotspots in Gujarat and many of these spots are also hotspots for the religiously inclined population. If you want to set out on a pilgrimage Yatra in the true sense of the term, it’s always wise to start your holy journey from the holy land of Gujarat. The major must-visit temples of Gujarat are as follows-

Dwarkadhish Temple is dedicated to the ‘King of Dwarka’, Lord Krishna for whom Dwarka was his terrestrial kingdom. This temple is highly revered by Vaishnavites and by Hindu pilgrims at large. The other name for Dwarkadhish temple is Jagat Temple. The Shikhar of the temple is 170ft high and flag attached to the Shikhar is changed thrice a day. The Dwarkadhish temple is one of the four sites to be visited during the all-India Chardham circuit Yatra and plays a pivotal role in the overall Gujarat travel itinerary too. 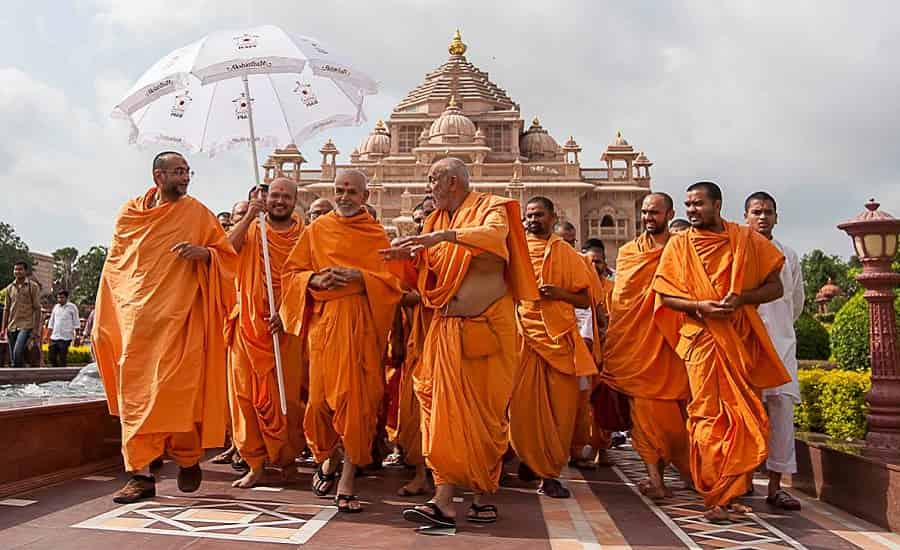 Swaminarayan Akshardham Temple covering a sprawling 23 acres is perhaps the largest Hindu Temple in the whole world. It is situated in the state capital of Gandhinagar and enshrines the deity of Bhagawan Swaminarayan. This temple, a superb architectural masterpiece was set up in 1992 under the initiative of Bochasanwasi Akshar-Purushottam Swaminarayan Sanstha. 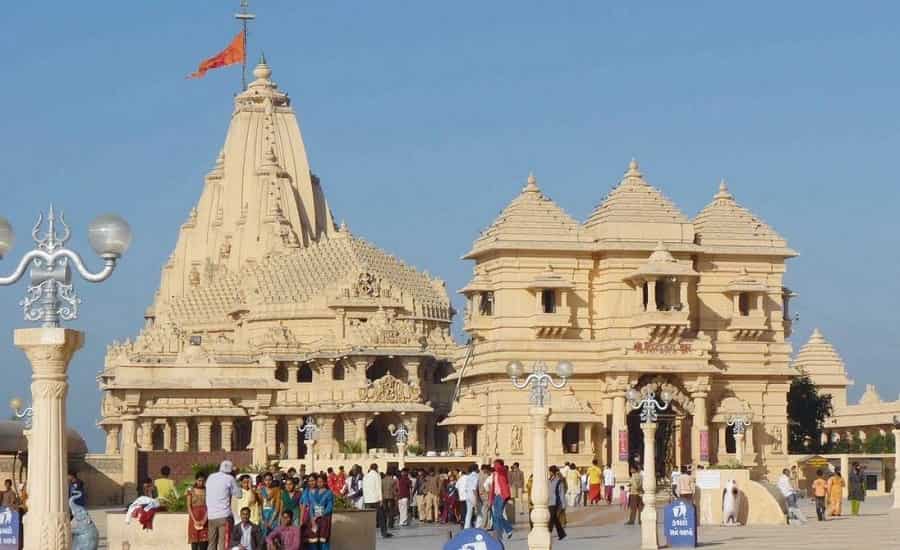 Somnath Temple is an abode of Lord Somnath, the other name of Lord Shiva. This temple is the first of the 12 shrines of Shiva Jyotirlingas. It is an ancient temple that stands on the seashore of Veraval in Saurashtra. Shaivites from all over the country make a bee line to this sacred pilgrimage spot all year round. For pilgrims and tourists embarking on their Gujarat visit, visiting the Somnath temple becomes quite indispensable. 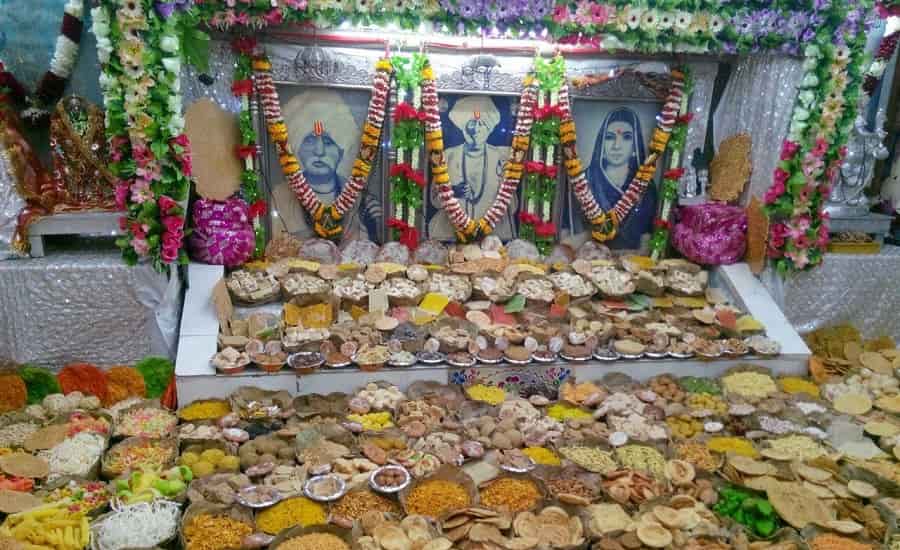 This temple of Virpur is built in honor of Jalaram Bapa, a very popular saint of Gujarat. Born in the year 1799, 14th of November this significant spiritual guru made a prominent positive impact on the lives of his disciples. His life span came to an end in the year 1881, 23rd February. Each year lakhs of devout disciples of this saintly figure celebrate ‘Jalaram Jayanti’ on the occasion of his birthday on the Shukla Paksha tithi of Kartika. 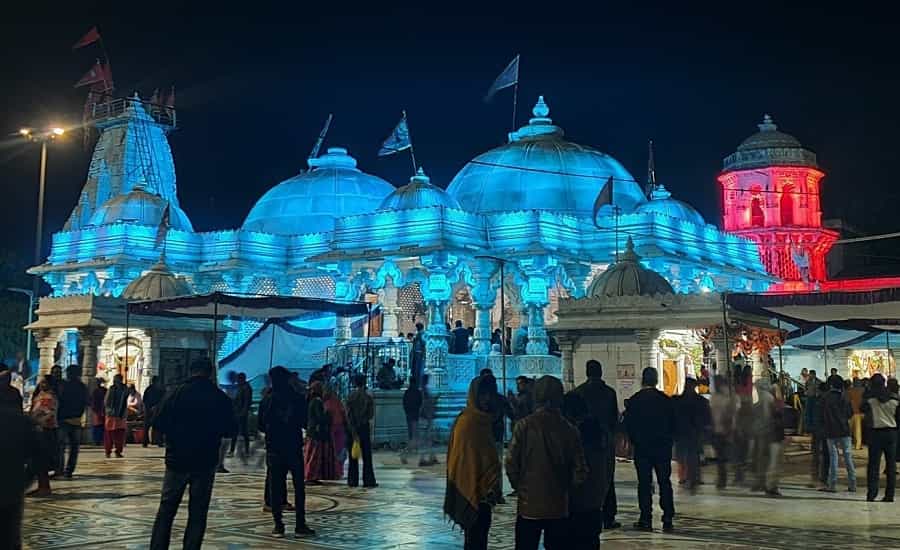 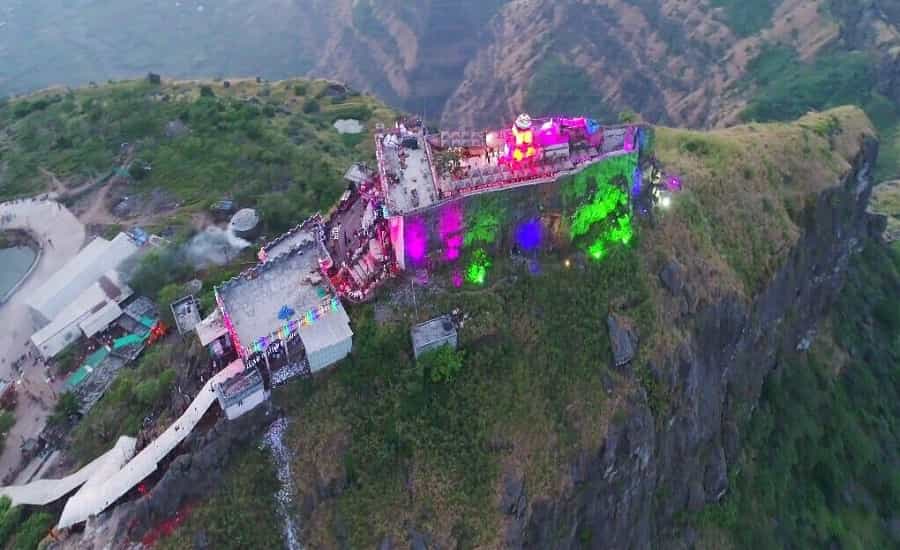 This temple on the peak of Pavagadh hills in the district of Panchmahal is an ancient temple belonging to the 11th century approximately. This temple of Gujarat is a famed Shakti Peeth and an abode of the Goddess Mahakali whose idol according to myths was installed herein by the great hermit Vishwamitra. 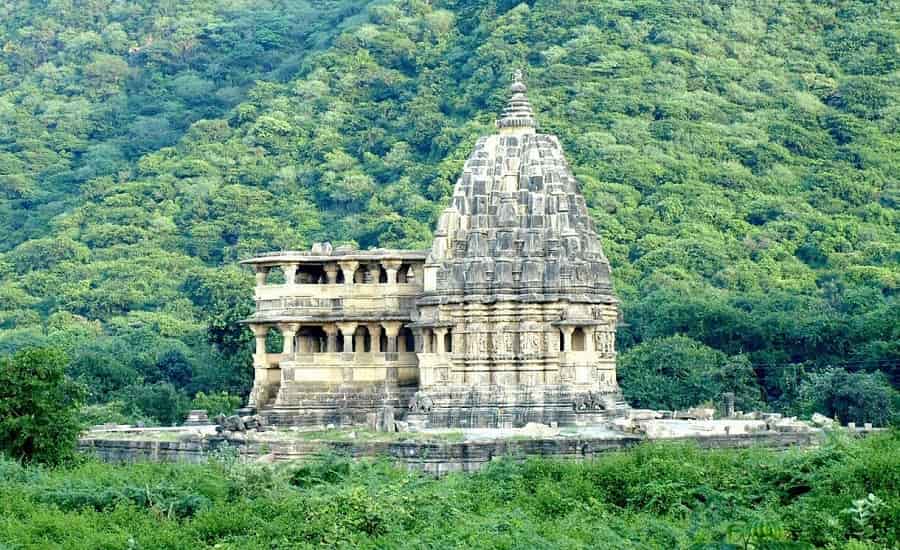 This Temple was built in honor of Surya Dev by the Jethwa rulers around 11th century. This magnificent temple is notable for its incredibly large base or Uagati measuring to 45.72 x 30.48m . 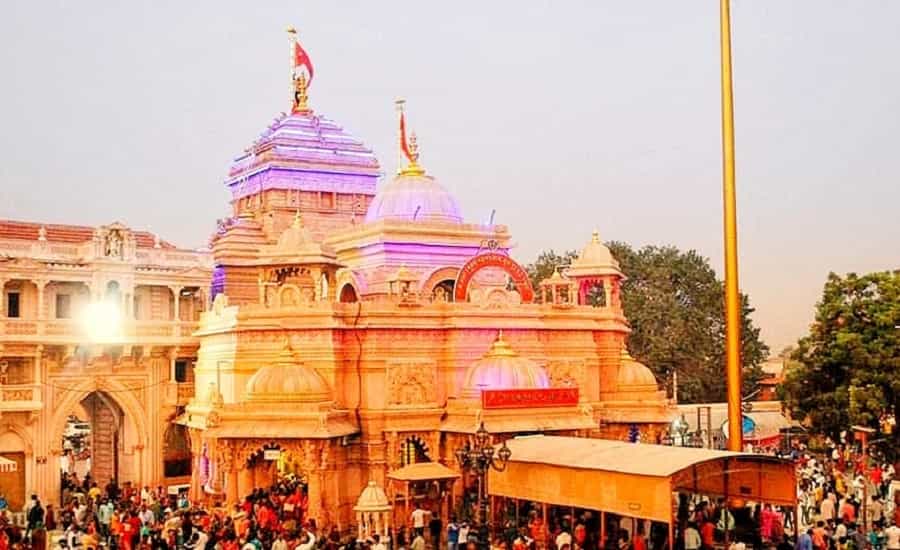 The Sarangpur Hanuman Mandir is a world famous Hanuman Ji temple run by Vadtal Gadi of Swaminarayan Sampradaya. The temple’s reputation spreads far and wide as it is considered the seat of special powers of exorcism. Any possessed person can be freed of the evil spirit by just being placed in front of the idol of Hanuman ji as per local belief. 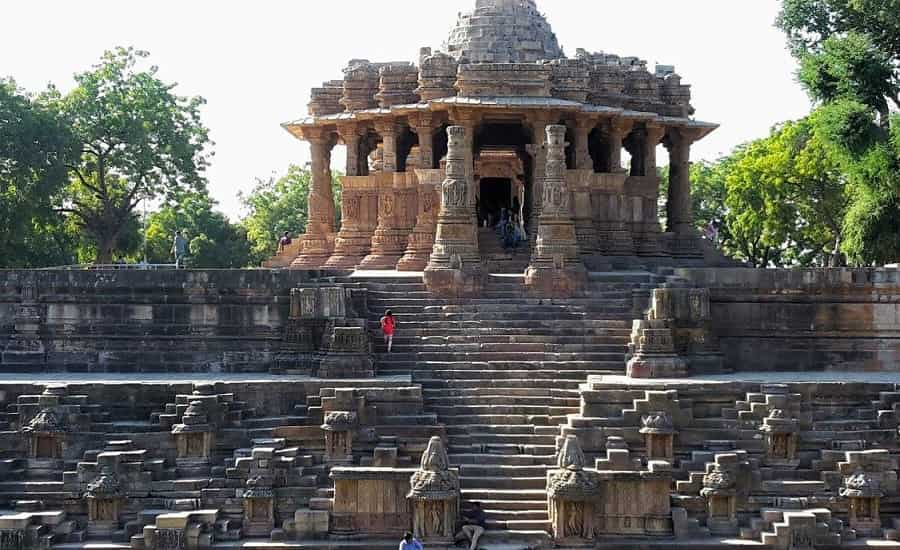 This Sun Temple in Modhera was constructed around the 11th century and is about 106kms from the city of Ahmadabad. This temple stands on a mound and has an architecture that is uniquely ornate. King Bhimdev I was the one who took the initiative for constructing this temple. The most striking feature about this temple is that when the sun rises in the morning, the first rays invariably shine on Lord Surya’s image that the temple bears. 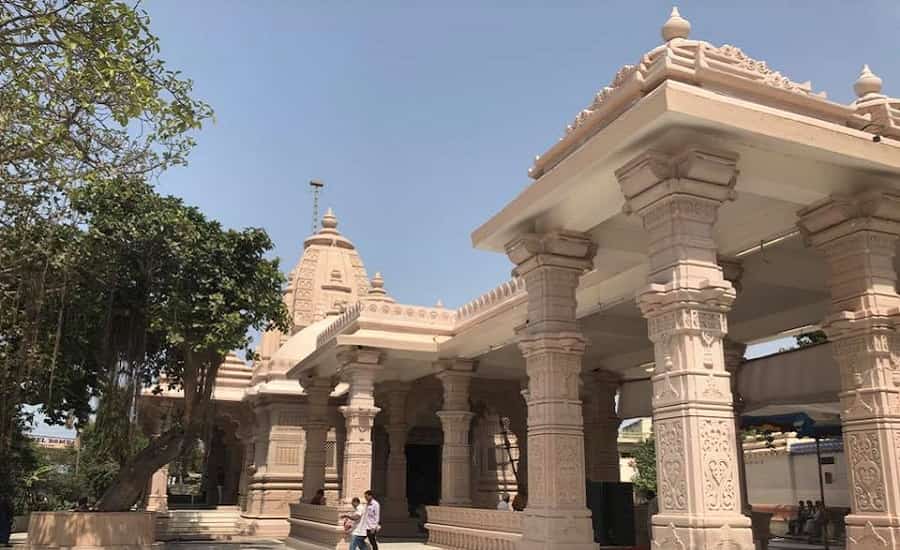 Bhalka Tirth falls between Somnath and Veraval and is an auspicious pilgrimage spot for Hindu pilgrims. Legends hold that it is at this spot where Lord Krishna was injured with an arrow being mistaken for deer. This holy site is situated right at the meeting point of three sacred rivers and pilgrims make their way to Bhalka Tirth via the ‘Nana’ which a small confluence or Sangam gate 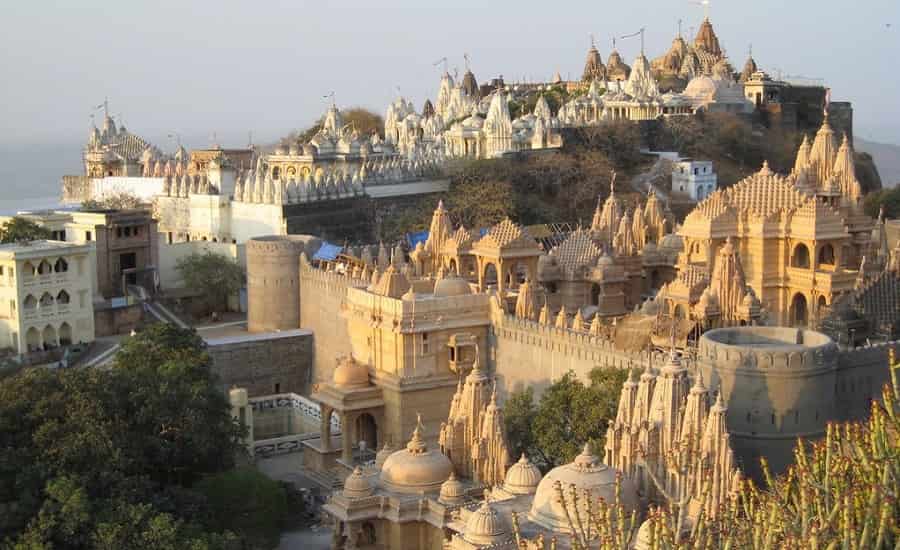 The Palitana Jain Temples atop the Shatrunjaya hills consist in some 873 highly ornamented white marble temples constructed around the 11th century. The main temples among these most revered by followers of Jainism are Bhagwan Adishwar Jain Teerth and Digamber Jain Temple.

This Shiva temple located in Saldi Village belongs to Lord Shiva but unlike other Shiva temples of Gujarat, instead of an idol what pilgrims get to see here is an underground ceaselessly flowing natural water source or Jaladhari which makes the temple quite a famed one among the pious pilgrims

The Ambaji Temple at a distance of 179kms from the city of Ahmadabad is a gorgeous white marble temple, enshrining the deity of Goddess of the pre-Vedic times, Arasuri Amba. Devout pilgrims frequent this ancient temple in large numbers all year round to experience the spiritual solace that pervades the temple ambience. The waving red flag on the Shikhar of the temple dancing welcomingly to the blowing winds as it wear hails pilgrims heartily to the temple.

The temple of Chamunda Mata is on the top of Chotilla Mountains and is an abode of Goddess Chamunda or Mata Rana-Chandi, the other name of Devi Durga who destroyed demons ‘Chanda’, ‘Munda’ as myths have it.

Bhadreshwar Temple is one of the most ancient Jain Temples in the Kutch region of Gujarat. Legends hold it that this temple came into existence in the era of the Mahabharata and thus followers of Jainism embarking on their Gujarat tour make sure to visit this temple descending right from the Puranic times. 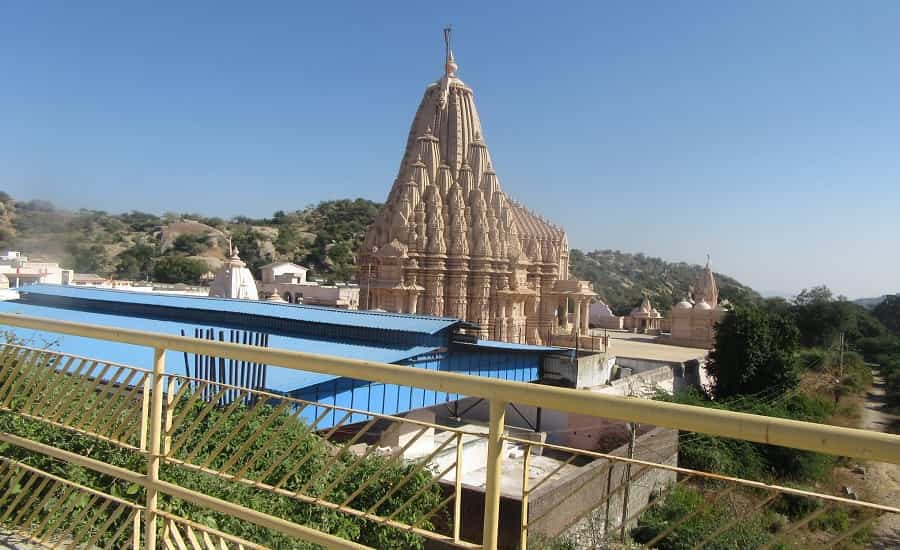 Ajit Nath Temple Mehsana is perched on the hills of the Taranga and was built in honor of Ajit Nath Bhagwan who was the 22nd Jain Tirthankara. The massive pillars and ornately carved ceiling of this beautiful Mehsana Jain temple draws pilgrims and tourists from far and wide. 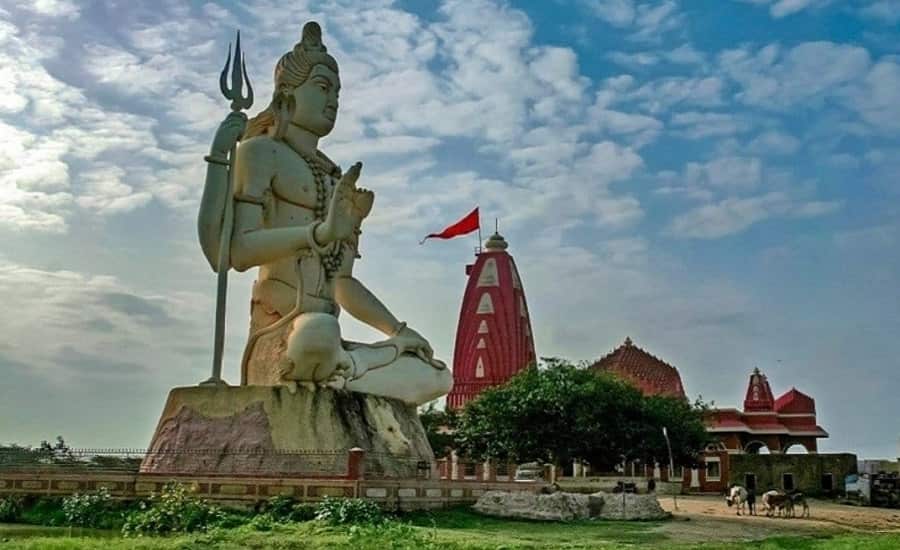 This Nageshwar Mahadev Temple, one of the 12 Shiv Jyotirlinga is immensely revered by Hindu pilgrims and Shaivites especially. This auspicious Shiva Shrine falls amid Dwarka and the Dwarka Island and is believed to offer respite to pilgrims from poisons of every kind.

The Nagabava Temple was erected in memory of Nagabava, one of the founders of the city that was established 500 years ago. The temple is visited by large number of devotees who wish to offer their prayers to Nagabava. 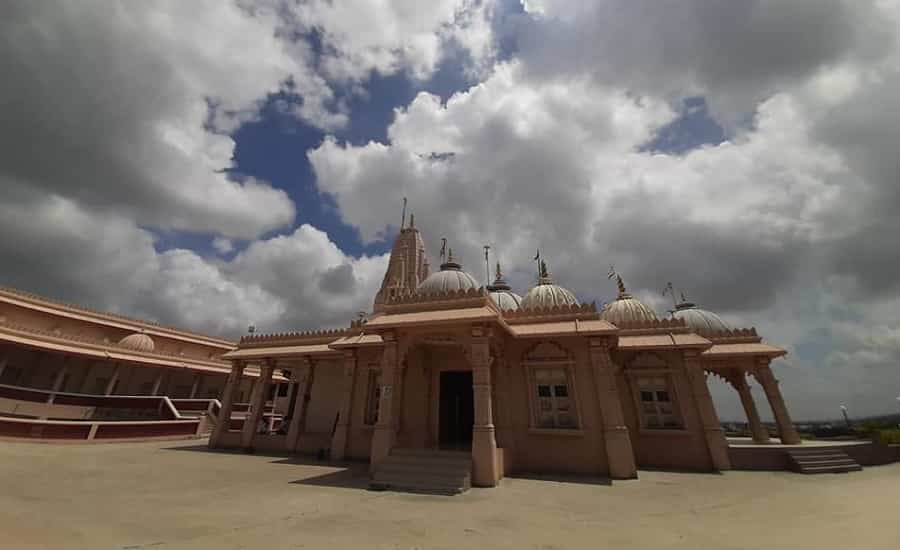 It is a famous attraction built by the BAPS Sansthan in honor of Lord Swaminarayan. The temple is highly visited by numerous devotees and pilgrims.

The Gita Mandir is a beautiful temple located on the outlying areas of Dwarka. This holy temple portrays the Bhagavad Gita. The main deity of the temple is Lord Krishna who has the idols of Lord Lakshmi Narayana and Sita Rama on his left and right respectively. 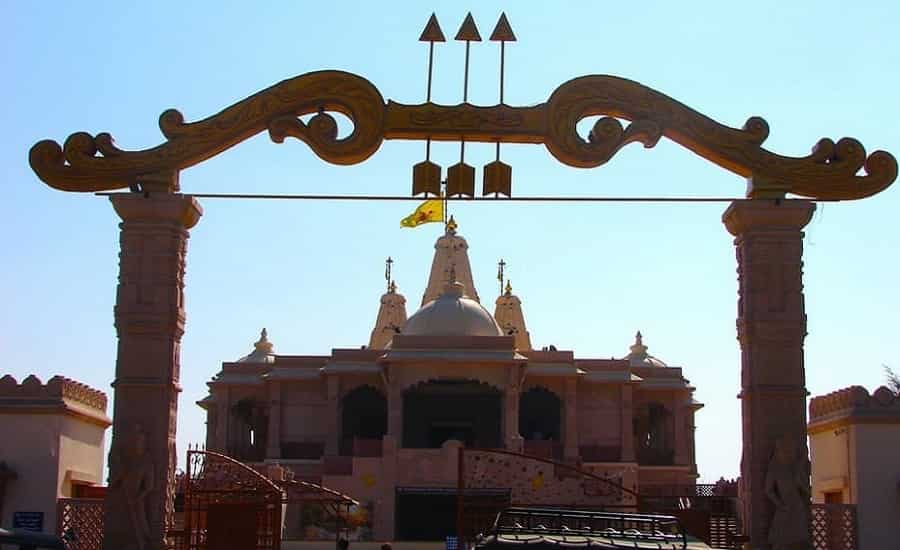 It is one of the most revered temples of the state. It is said that the prayers said here with a true heart surely bears fruit. The temple was reconstructed under the reign of Ahilyabai Holkar, a famous Maratha warrior & saint queen who also restored other temples that were destroyed by the Muslim looters.

The Bhavnath Shiv Temple is snuggled in Girnar, which is made in honor of Lord Shiva. Highly revered by the devotees of Lord Shiva, the temple celebrates Mahashivratri with great pomp and cheer every year with grand arrangements.

The famous temple is situated on the banks of the holy river Triveni. It is the spot where, Bhagwan Parshuram was relieved by Bhagwan Somnath after his penance for the curse of the Kshatriya killings. Divine Leela Parshuram is perpetrated here by a beautiful Parshuram Temple and two ancient kunds.

The Gita Mandir is a spectacular attraction that throws light on the values of the Bhagavad Gita. Constructed in the year 1970 by the Birlas, the temple comprises intricately carved walls and ceilings adorned with prominent hymns from the sacred book.

Made in honor of Devi Rukmani, this shrine is a great architectural wonder that was erected in honor of one of the beloved consort of the Lord. The masterpiece is adorned with paintings from the 12th century and rich carvings that lightens up the beauty of the entire shrine.

So these are some of the top-rated Gujarat temples which you shouldn’t miss during your Gujarat visit.