When we think of palatial monuments and historic forts, ‘Rajasthan’ is the very word that comes to our mind at once. But Gujarat, its neighboring state too spells of lavish architectural splendor. Forts, monuments, archaeological sites abound in Gujarat, taking you back in time. The landscape of this fascinating state comes with an enticing range of variety. From the vast barren stretches of sand in the Rann of Kutch towards the NE to the dense woods of Panchmahal and Dangs towards the South, everywhere Gujarat speaks of natural extravaganza and variety. This is a land where princes ruled and their legacy still lives in the states of Junagadh and Jamnagar in Saurashtra, in Baroda and in the south in the form of magnificent forts and monuments. Suppose you start from the North-east of Gujarat in Kutch and explore downwards these are the old forts you are likely to come across.

Lakhpat today is sparsely populated but was once known as city of “lakhpatis” or millionaires with the fort and buildings in virtual ruins. The Fort, built by Jamadar Fateh Muhammad around this old city, dates back to the 18th century and runs a distance of 7 km with breaks in between.  Inside the fort you will find the tomb of the Sufi Saint Pir Ghaus Muhammed, a beautiful carved structure in red sandstone with a dome. Another monument of interest is the Gurudwara Sahib, important for the fact that Guru Nanak stayed here while on his way to Mecca. 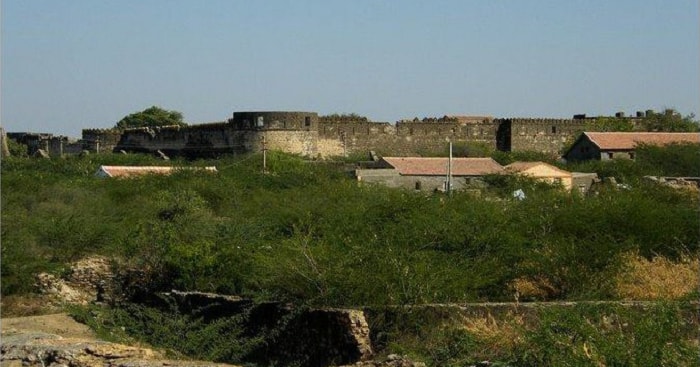 Also in Kutch you will find Tera Fort in Abdasa, 85 km west of Bhuj, built by the Jadejas sometime around 1718. The fort was destroyed in the battle between Sumraji Thakore and Lakhpatji.

You will find Kanthkot fort in Bhachau, not far from Bhuj. This fort dates back to the 8th century and stretches over 5 km on a hill. Once the stronghold of the Kathis, it was overrun by the Chavda, the Solankis and the Vaghelas after which it came into the hands of the Jadejas. There was a Sun temple here but nothing now remains except a few scattered stones.

Travel farther up North in Kutch and you will come upon Roha fort in the Nakhatrana Taluka, about 50 km North of Bhuj. Roha was attacked by Alauddin Khilji and the princesses who sought asylum here committed suicide rather than fall into the hands of the invaders. Today it is in ruins and one can only think of the royal life style of the kings who ruled here.

Just outside Bhuj you will come across the remnants of the famed Bhujia Fort sitting on a small hill. Construction of the fort was started by Rao Godaji in 1715 and was completed by Maharao Deshalji later on. The fort defended the town of Bhuj and withstood attacks by Rajputs and Muslim as well as Mughals. Do visit the temple dedicated to Bhujanga Naga that sites in one corner with interesting folklore around it. Bhujang Naga is said to be the brother of Sheshnag and traveled from the nether worlds to free the region from demons. Today the Fort is held by the Indian Army and you can only enter it on Nag Panchami day. Bhuj is also home to the Old Palace known as Aina Mahal or Palace of Mirrors built in the 18th century. It is now known as Madanji Museum famous for its hall of mirrors. Also in Bhuj you will find Prag Mahal built by Rao Pragmalji II in 1838. This has decided Gothic influences and is European in style.

As you near Saurashtra you will come upon Zinzuwada Fort near Zinzuwada town. The fort is an 11th century structure set up by the Solanki Rulers. This is a huge structure and is purely Hindu in architectural style which alone makes it worth a visit.

Jamnagar, once known as Navanagar, is the city founded by Jam Shri Rawalji in 1540, made famous by Maharaja Shri Ranjitsinhji for his cricketing prowess. It is also home to the Lakhota Fort located in the city with the famed Lakhota Palace within sitting next to a water body. The Fort is a museum showcasing artifacts, arms and lifestyle objects of the princes and surrounding areas as well as armoury.

Junagadh is a princely city and as befits one, it has the Uperkot fort as testimony to a royal past. The Uperkot fort is said to have been built by Chandragupta Maurya around 319 BC and was destroyed and rebuilt several times since then. Some state it is even more ancient, dating back to the times of Mahabharata. Whatever the case, the Fort covers a vast area with three gateways and battlements studded with cannons said to originate in Egypt. Inside you will find the Jami Masjid, Buddhist caves and step wells built by Chudasama Rajput. The monuments here such as the palace of Ranakdevi are in dilapidated condition.

Further down the coastline of Saurashtra you will come upon Porbandar and its Dhoraji fort dating back to 1755 AD. A massive structure, the fort has four main gates and three small gates. The walls are adorned with carvings and carved trellises with the entrance gate serving as the focal point to Darbargadh Palace. The Palace carries sculptures and carved pillars.

Just 8 Km from Mandvi, a port town, you will come across the fabulous Vijay Vilas Palace, now a heritage hotel. The palace was built in 1920 and is a mix of Rajput and European style architecture with exquisite carvings.

Navlakha Palace dating back to the 17th century and located in Gondal is another one of Saurashtra gems. The Palace has large open spaces around it and has the Grand Darbar Hall occupying pride of place. You will find many antiques in the museum in the Palace. Gondal also hosts the Riverside Palace, built in early 19th century by the prince. Now a heritage hotel it has a distinctive colonial style. The Orchard Palace is another of Gondal’s attractions, built by its erstwhile Maharaja in a colonial style and it is surrounded by a large garden. You will find paintings and antiques inside.

Travel a bit inland and you will come to Idar, a small town with the Ilva fort overlooking the town from a hill. This is an ancient fort dating back to the times of Mahabharata with remnants indicating its previous architectural splendours. In Idar you will also find the Dolat Nivas Palace built by Maharaja Dolatsinhji in 1922, sitting next to the Ilva Durga.

About a 50 km from Baroda in central Gujarat you will come upon the Pavagadh fort better known as Champaner. The city was founded by Vanraj Chavda in the 8th century and takes its name after General Champa. The Pavagadh fort located on a hill was later taken over by Chauhan Rajputs and then it was attacked and captured by Mahmud Begada in 1484. He rebuilt the city and the fort that was subsequently attacked by Humayun. Champaner is a wonderful place and could be said to occupy pride of place in Gujarat and is a declared UNESCO World Heritage Site.

Move on to Ahmedabad, once the capital of Gujarat and you will find the Bhadra fort in the heart of the city. Built by Ahmed Shah in 1411, today the Fort is surrounded by hawkers and very little is left worth seeing. The fort also is home to Bhadra Kali temple and there is a legend associated with the fort. It is said Goddess Laxmi visited the fort and the watchman recognized her. He asked her not to leave till he returned and went and beheaded himself. Laxmi, thus, had to remain and this is said to have contributed to the prosperity of the city. Manek Burj is the foundation of the fort and is today part of the Sabarmati Riverfront attractions.

About 30 km from Baroda is the town of Dabhoi where you will find Dabhoi fort built in the 6th century by Siddhraj Jaisinh. It is a magnificently grand fort, ranking with the best in India and is a must visit if you want to view Hindu architectural styles and principles of vaastu.

In the south of Gujarat you will find the textile and diamond city, Surat, home to the Old Fort, said to have been built in 1347 AD. Emperor Firoz Tughlak built the Fort to defend the city. Surat is also home to Digvir Nivas Palace in nearby Vansda. A fine example of 18th century architecture, the Palace, built by Maharaval Virsinhji in 1781 is made up of local Ashlar stone and is quite spread out. It reflects French and British styles.

The Gaekwads ruled from Baroda and built the magnificent Laxmi Vilas Palace in 1890, one of the finest styles of Indo-European style of architecture. The Palace is said to be 4 times bigger than Buckingham Palace and has exquisite collections worth a look. Nazarbaugh Palace is older and was built by Malhar Rao Gaekwad. The other palaces in Baroda are the Makarpura Palace built in 1870 by Maharaja Khende Rao, a beautiful building in the Italian architectural style, and the Pratap Vilas Palace built in 1914 by Maharaja Ranjitsinhji of Jamnagar in a distinctive European style.