Alaknanda is famously known as the river that flows beside Badrinath, one of the char Dham in Uttarakhand. Pilgrims consider it as a sacred river but for those looking for adventure, the Alaknanda is a challenge for rafting.

While religious devotees consider the Bhagirathi to be the prime source of the Ganga, it is actually the Alaknanda River that contributes a larger portion of water. This river originates at the confluence of the Bhagirath Kharak and Satopanth glaciers in Uttarakhand and flows past Mana where it meets the Sarasvati tributary and goes onward down the Alaknanda valley where it joins other rivers. Alaknanda is also unique in that it flows past the five Prayags and meets a river at each of the Panch Prayag. While these are of no less religious significance, for devotees the prime focus is on Badrinath. Tourists visit Badrinath, stay overnight at any of the hotels at Badrinath Dham and take a dip in the turbulent waters before offering prayers in the temple.

When Ganga descended to Earth as a result of Lord Shiva granting a boon to King Bhagirath, she was trapped in the matted locks of Shiva and split into five streams. Alaknanda is one of the holy streams to emanate from the locks of Shiva.

While the Ganga is considered the holiest of holy rivers, the Alaknanda is of no less importance. It is perhaps the only river to pass by the holy spots of Panch Prayag. It meets the Bhagirathi at Devprayag and flows on to Rudraprayag where it meets Mandakini. At Karnaprayag the Alaknanda confluences with Pindar River and at Nandaprayag it meets Nandakini river. At Vishnuprayag it confluences with the Dhauli Ganga. From here onwards the river is known as Ganga. There are 14 Prayags in India but these Panch Prayags have the greatest importance no doubt due to the fact that the Alaknanda touches each spot. Of all these Panch Prayag, Devprayag is the most important and devotees believe that bathing at the confluence of the Alaknanda and Bhagirathi washes away sins.

The Alaknanda originates at Satopanth and Bhagirathi Kharak glacier and travels a stretch of 195 km before ending at Devprayag in Garhwal. The left bank tributaries are the Saraswati, Dhauliganga, Nandakini and Pindar. Its right bank tributary is the Mandakini.

The Alaknanda is a turbulent river and has been the cause of destruction several times. Its waters have now been harnessed to generate power in the form of 6 hydroelectric dams and 8 are under construction. 23 more hydel projects are proposed on this river.

It is this same turbulence that has attracted adventure seekers. The river is a challenge for those who engage in white water rafting. Most such white water rafting adventures usually start at Rishikesh. The more adventurous go in for water rafting at Devprayag. Some try the stretch from Gauchar to Rudraprayag. One of the most challenging stretches is near Kaldubugar, about 25 km from Chamoli where the waters are quite turbulent.

The Alaknanda, as can be seen, is of spiritual importance and it is also the beloved of adventure seekers who find its turbulent rapids a challenge to their skills. 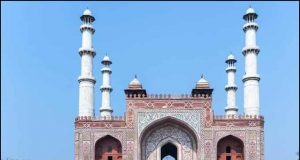 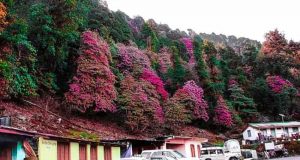