Karnataka is dotted with many picturesque lakes…these lakes are not only picturesque but also steeped in ecological diversity. Tourists from all around the country visit these lakes in large numbers. There are numerous such idyllic places in Karnataka but here are best rated ones…read on to learn more.

This is one among the most visited places in Mysore, Karnataka. The dam was built by Sir M Visvesvaraya across the river Kaveri that flows in Mandya region which is close to Mysore. The lake and the dam are very popular due to the Brindavan gardens that were built along with the dam. It is very popular among the tourists as well as locals alike. There is also boating facility that ferries people across and beautiful musical fountains that put up a great show almost every day for the amusement of the people. The location is so beautiful that it has featured in several movies in the song and dance sequences. The dazzling lights and the several varieties of flowering plants add to the attraction that draws people in thousands to this magnificent place.

Located close to the Chamundi betta or hills is the Karanji Lake. The lake provides the most stunning backdrop to the Lalith Mahal Palace. Being enclosed in the zoo area, the lake is a great place for the migratory birds to stop by. There are several different species that have made the lake their temporary as well as their permanent home. The lake’s surrounding, which provides great vegetation as well as rich source of food to the birds, has made this location a great breeding site for this winged species. The lake is easily accessible as the Chamundi hills are well connected. Apart from the lake, the Chamundi hills and the Chamundi temple are the other attractions that one can see close to the Lake.

Another very popular lake in Mysore, located in the heart of the city is the Kukkarahalli Lake. It is a manmade lake commissioned by the then king, Krishnaraja Wodeyar, who belonged to the Mysore dynasty. It designed and built by Poornaiah the dewan of the time. The lake is a great place to watch birds as there are several types and species that visit it often. One could spot the spot billed pelicans, night herons, spoonbills, storks etc here. According to sources, the lake used to be visited by more than 180 different varieties of birds. However, due to the severe urbanization this lake has seen a downfall in the pristine ecology of the past. Government now has taken several measures to restore the lake to its former glory.

If you go to Bangalore, Hebbal Lake will be one among the most popular places. It is close to the national highway number 7, which is located to the north of Bangalore and the best landmark is the outer ring road which is very popular in Bangalore. It is a manmade lake built by blocking the natural valley system using a dam. It was done so in the year 1537 under the table administration of Kempe Gowda. The lake now supports a diverse ecology system. One can spot birds like spoonbill, pintail, spot-billed duck, pelicans, grey as well as purple herons etc. here. This diverse variety of birds found here is due to the growth of water Hyacinth and Typha in great abundance. Sadly, the water body is not a clean one due to the heavy inflow of sewage. However, it is still a place to visit just to see the variety of birds that visit this lake here.

Located in the Lal Baugh botanical garden, it is one of the most scenic and beautiful of lakes in Bangalore. The entire Lal Baugh was built under the table rule of Hyder Ali. It was completed and further developed by his son, Tippu Sultan. The visitors can enjoy the beauty of the lake in the midst of the trees and flowering plants around. There are animals and birds who are constant visitors to the park. The best part about Lal Baugh is that it is centrally located and very easy to find. It is very close to Shivaji Nagar. A minimal entrance fee is charged. One might require more than a day to explore all the corners of the gardens.

One among the largest lakes in Bangalore is the lake of Bellandur. It takes up nearly 892 acres of land and is considered to be more than 130 years old. The lake is an important one as it is part of the drainage system of Bangalore and drains and provided water to several parts of Bangalore, but the excessive urbanization has led to a downfall in the fresh water making it useless to the communities that depended upon its water. Now the water body is more a place for drainage system to flow and reach the varthur lake area.

Another very popular lake of Karnataka is the Ulsoor Lake in Bangalore. It is also popularly called the Halasuru Lake. It is located to the east of the city. The lake derived its name due to the presence of jackfruit orchard close to the lake. There are several temples which date back to several centuries and a Sikh Gurudwara in close vicinity. This lake too was very popular source of water to the city; however, the severe urbanization has ruined the pristine ecosystem. The government has taken several steps to undo the damage and the restoration works still continue. The lake has facilities like children’s play area, boating, fountains etc.

Sankey tank is a great tourist spot. The lake offers activities of excitement as well as relaxation. People who visit here enjoy boating in the area. It is also a major picnic spot and is enjoyed greatly by the children and the elders. The lake takes up nearly 37.1 acres of land and was commissioned by Col. Richard E Sankey after whom it is named. The lake is located to the west of Bangalore, right in the middle of Malleshwaram, Sadashiva Nagar and the Vyalikaval.

Hesaraghatta Lake is a manmade lake, located to the north-west of Bangalore. It was made for the purpose of supplying drinking water to the city and was built across the river Akravathy, in the year 1894. The lake is a great place for bird lovers as there have been several species spotted here. The lake is said to have more than 2000 birds of 29 species that often visit the lake. Among them kingfisher, magpie robins, mynas, bulbuls etc are most commonly seen here. This has been so in spite of the deterioration that the lake is going through. The government has now stepped forward to restore the lake. There have been even activities like boating and river rafting. Apart from the migratory birds that visit the lake, a government aquarium, a dairy farm, a Nrityagram or a residential type school teaching dance are other attractions around the lake.

One of the biggest lakes in the capital of Karnataka is the Madiwala Lake. It is located in the BTM Layout area and has an area of 114.3 hectares. It is among the few lakes that still has clean water. It is a famous tourists spot due to the boating service that the forest department has started. It also is a great place for watching birds especially during the pre monsoon and post monsoon times. The most common ones are the Pelicans which can be seen in huge numbers. The lake also has a beautiful park and facilities for the use of children. It has been maintained and managed by the Karnataka State Forest Department which ensures that the facilities are well looked after along with the maintenance of the lake.

Close to the Sulimalthe village is the Honnamana kere. It is the biggest lakes seen in the area of Kodagu (Coorg). The lake is worshipped and revered by the people located in the area as it is said that the goddess Honnamma sacrificed her life for the betterment of people of the locality. Every year, during the gowri habba that is celebrated in a grand way here, the Bagina that is put together by the womenfolk is left in the waters of this lake after finishing the ritual offerings and Pooja. The surroundings of the lake make it a great place for a visit and relaxation. The mountains and small cliffs around and the pleasant cool weather make it a great tourist destination.

Located to the south of the great Tungabadra river is the Pampa Sarovara Lake. It is in the district of Koppala which is close to Hampi. The lake revolves around the legend of a character in Ramayana called Shabari who waits with great faith and devotion for a sight of Ram and on his arrival helps him by suggesting names of Hanuman and Sugreeva, who, in the epic, are the main characters who help to find Ram’s wife Sita. It is also considered to be the place where Parvati, wife of lord Shiva, sat in meditation and took penance in order to please the lord. The lake is a beautiful one usually filled with lotuses that looks most stunning when they are in full bloom. There are also a Lakshmi temple and a small Ganesh Shrine in close vicinity. Usually there is a heavy flow of pilgrims in this area, who visit the lake due to the various legends that revolve around the lake.

The Lotus Lake located in Bijapur is famous for its historical Significance. The lake overlooks the fort of Pangarh, which is said to have been built around the 12th century. The main attractions here are the fort and the local tribes. It is said that one can even now observe the local tribes using the traditional methods of fishing using the harpoons. Apart from this, the lake allows for boating along with fishing.

Pilikula Nisargadhama is a popular picnic spot in Mangalore. It houses the Pilikula Lake which in translation means a Tiger’s lake. It is said that in the olden times one could see several tigers coming to this lake for drinking water. The lake is located within the park, developed by the Mangalore city corporation and is located close to Vamajoor. It is well connected by road. The Mangalore City Corporation has built a water based theme park here. Apart from the theme park, one can enjoy boating in the lake and also it is a great place for picnic. The boating, the theme park and the recreational facilities along with the scenic beauty of the lake and the garden within the park make it a great tourist spot.

Unkal Lake is located in Hubli at a distance of about three kilometers from main Hubli town. The lake is a beautiful one, with a statue of Swami Vivekananda that adorns the center of the lake. The lake itself is considered to be more than 110 years old. The lake offers facility for boating several recreational facilities especially for the children. This lake is considered to be a major source of water supply to a major portion of the town of Hubli.

The above mentioned lakes are just a few among the several that can be found in the state of Karnataka. However, these are some of the great tourist destinations due to the various facilities and attractions that they promise. Most of them have either historical significance or legends attached to them.

Tourist Places Near Nagpur, The City of Oranges 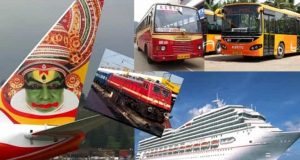 How to Reach Kerala