In India, you will find a large number of temples in every state. These temples are dedicated to different deities and are visited by not just the local residents, but also by the devotees from other cities, states and from foreign countries too. While some of these temples have been built in the recent past, there are others that date back to thousands of years in the history of mankind. The years for which the temple has been in existence largely influences its popularity and thus the number of devotees visiting such a temple keeps increasing with time. Kamakhya Temple is one such historical temple where a lot of devotees gather every year during the festivals and also on normal days to pay respect to the deity they follow.

The Kamakhya Temple is built in the city of Guwahati in Assam. It is located at Nilachal Hill on the city’s west. It is one of the 51 Shakti Peethas and is also known as the yoni peetha.

The first temple was built at this site in the first century when the area came under the Kamarupa Kingdom. The rock inscriptions found in Ahmadabad had mentioned about this temple. The inscriptions on these rocks were carved by Samudragupta, an emperor of the Gupta Dynasty.

The original temple structure was destroyed in the second millennium. It was reconstructed by a ruler of the Koch Dynasty in 1565. The architectural design was changed and sculptures and images depicting various Hindu Gods and Goddesses adorned the exterior temple walls.

This temple carries along a legacy of traditions and legends along with it. One legend says that it was Vatsayana, the author of Kamasutra and a saint, who suggested the King to initiate worship of Tata, a Tantric Goddess to discourage the practice of sacrificing humans, a ritual that was famous among the tribal people.

Kalika Purana mentions that the temple has been built at the same place where Lord Shiva used to secretly meet Sati. The yoni of Sati fell when Shiva was dancing with her corpse, a fact that was not revealed till the time Kamadeva, the God of Love searched for it in a bid to free himself from Brahma’s curse.

It is also said that Kamakhya Devi was once proposed for marriage by Narakasura, who was driven by his carnal desires. Kamakhya put a condition that if he constructs a stairway to the top of the hill within a single night, she would marry him. Narakasura employed all his efforts and had almost made it through, when Kamakhya strangled a cock and made him crow so that Narakasura could be fooled. The trick worked and Narakasura left the task unfinished. When he came to know the truth, he killed the cock at a place which was then named as Kukurakata.

Another legend states that the royal family of Koch Bihar Dynasty was denied permission to offer puja by the Goddess herself. This curse led the desecendants of the royal family to walk with their heads down while passing from the temple’s front, without once looking towards the hill.

As the royal family withdrew its support, the temple had to face a hard time. In the mid sixteenth century, King Jayadhvaj Singh managed to conquer the region of Lower Assam. The interest of the people for the temple increased considerably during this period, and the temple underwent reconstruction and renovation in the coming years.

Both the modes of worship, the Vamachara (Left-Hand Path) and Dakshinachara (Right-Hand Path) can be used to worship Goddess Kamakhya. Some devotees choose to offer flowers, while others indulge in sacrificing animals to please the Goddess. Female animals are usually not sacrificed except on occasions of mass sacrifice.

The temple has been divided into three chambers, one of which is usually not used by the devotees. A second, square shaped chamber houses an idol of the Kamakhya Devi. The walls of this chamber are filled with ancient sculpted images of Gods and religious inscriptions. Through the middle chamber, the devotees approach towards the sanctum sanctorum, which has been made in the shape of a cave. Unlike other temples, no idol of the Goddess has been placed here. Instead, there is a water stream that flows over a structure that represents the female reproductive organ, vagina or yoni.

This water stream turns red at the time of Ambuvaci festival in the summer season. Though the color turns for a scientific reason, the red color symbolizes the menstrual fluid of the Goddess. This occurs for three days and the temple remains closed for the following three days.

The yoni remains covered with flowers and silk cloth throughout the year.

The temple is located at an elevation of 800 feet above ground level.

Guwahati is the capital city of Assam and the visitors will find a large number of restaurants that serve Assamese and other cuisines to the patrons. Some of the reputed outlets of the city include Momo Ghar, John’s Kitchen, China Town, Paradise, JB’s, Rebati Chaat House, Hotel Sagar Restaurant, Bhoot Jolokia, Florentine Fine Dining, Naga Kitchen, The Morung, Maa Kali, etc.

Tourists can stay at one of the following hotels: Hotel Dynasty, Atithi, Kiranshree Portico, Amrit Regency, Rajamahal Hotel, Ambarish Grand Residency, etc. All these hotels are located very close to the temple, making it convenient for the tourists to explore the temple complex without spending much time on commuting.

The doors of the temple open at 05:30 am and nitya pooja takes place at 06:00 am. The devotees can enter inside the temple 08:00 am onwards and join the queue that forms to enter into the sanctum sanctorum through a narrow alley. A series of steps lead to the water stream where the devotees pray.

The doors of the temple are closed at 01:00 pm, during which the devotees are offered Prasad. The doors re-open at 02:30 pm and are closed again at 05:30 pm after the aarti takes places.

The temple is located at a distance of approximately eight kilometres from the Guwahati railway station. It connects the cities of the state and country with direct and connecting trains.

The Lokopriya Gopinath Bordoloi International Airport, at a distance of approximately 20 kilometres from the city centre, provides connectivity with several national and international destinations.

Guwahati is connected to the states of West Bengal, Jharkhand and Bihar through the National Highway 31. It is also connected to the state of Nagaland by the National Highway 37, thus making it easy for the devotees from these states to opt for a road transportation mode if they wish to. The state run buses provide a comparatively inexpensive transport mode for the tourists from the adjoining cities and states.

Once you reach Guwahati, you can opt to travel by the city buses, auto rickshaws, or trekkers that carry 12-15 passengers at a time. Alternately, private taxis are also available as per your requirement. 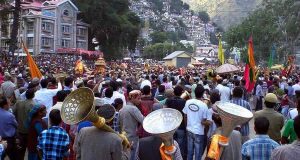 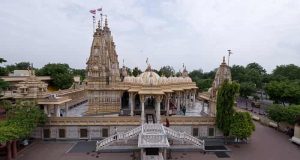 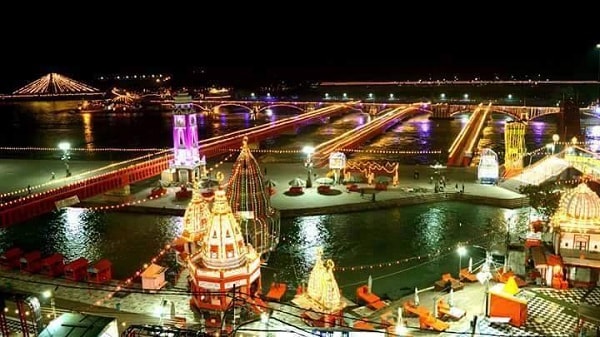 Best Places to Visit in Haridwar