There is always a fragment of history within every few miles you travel in the roads of India. Be it a monument, a park, a sanctuary, or a monument, there is always a place of historical importance that people encounter while passing through the lengths and breadths of the country. The Bhimashankar Temple, located at a distance of 127 kilometres from the city of Pune, is one such fragment of history which is frequented by residents of nearby villages and tourists.

Bhimashankar Temple is in the Khed Taluka of Pune district.

The origin of this historical shrine is traced back to the 13th century according to the scriptures. The hill ranges near the temple were home to an Asura (evil being) Bhima and his mother. The divine beings and the common people were afraid of Bhima, who was searching for the purpose and reason of his existence. He was unaware of who his father was.

His mother, Karkati, told him about his father Kumbhakarna and also about how he was killed by Lord Rama. He craved for revenge, albeit in a different manner. Lord Rama was an avatar of Lord Vishnu and thus Bhima decided to please Lord Vishnu by going through a long period of self-abasement.

Lord Vishnu, unaware of his cruel intentions, granted powers to him which he used to cause anarchy. He managed to take over the heaven after defeating Lord Indra. This anarchy enraged the Gods, who turned to Lord Shiva for help. A war ensued between Shiva and Bhima, which was concluded by Shiva bringing down the evil to ashes. Upon his victory, Lord Shiva accepted the request of other Gods to reside at the site.

A legend goes that the Bhima River was originated from the sweat of Lord Shiva.

Built in the 13th century, an addition was made to this structure in the form of a Sabha Mandap (Gathering Hall) in 18th century.

A unique feature of the temple complex is the bell hanging adjacent to the temple entrance. This is one of the two bells that Chimaji Appa collected after defeating the Portuguese army.

The walls and the pillars of the temple showcase carvings of divine and human beings, along with the scenes of mythological events. Apart from the Jyotirlinga, a shrine dedicated to the Lord Saneeswara is also found in the temple. Outside the temple, the statue of Nandi, the Vahana of Lord Shiva, has been installed.

Close to the temple, the tourists can see a shrine of Kamalaja, an avatar of Shiva’s wife Parvati.

The historical temple is surrounded by many beautiful fragments of history, such as ancient Buddhist carvings, Hanumana Lake, Bombay Point, etc.

The forest encompassing the temple is dedicated as a wildlife sanctuary, where the photographers and nature lovers will be able to watch the life and colors bloom in the form of animals, flowers, trees, birds, etc.

Silence and occasional sounds of birds, breeze, animals, and the water flowing from the river make the visit of worshipers a worthy experience, cherished for years to come, and often compelling them to visit this place again.

Accommodation and meals are available at a reasonable price near the temple complex. Visitors can opt to stay in Dharamshalas near the temple or in the hotels and resorts in nearby villages.

The best time to visit Bhimashankar Temple and the surrounding areas is between the months of August and February. The weather remains pleasant and till August end or early September, visitors will be able to watch the forests and the river in full bloom owing to the rains.

Although the temple is open all year long, visiting it during the months of summer can be quite daunting.

The festival of Maha Shivratri is celebrated with great exhilaration in the temple.

The temple can be reached through public transport from Pune. Regular buses begin from 05:30 a.m. till 04:00 p.m. Visitors can also take private vehicles to Bhimashankar. The rush of visitors increases dramatically on weekends and during the festival of Maha Shivratri. 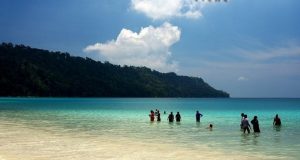